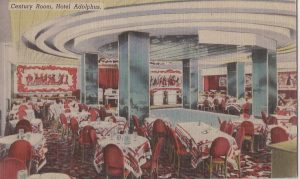 Dallas is a city known for its expensive taste; expensive cars, fancy food, and luxurious hotels are in no short supply here. And the stunning, sparkling skyline of this opulent city would be incomplete without the ornate figure of the old Adolphus Hotel. Constructed in 1912, the Adolphus was intended to be the first grand, posh hotel in Dallas, and remains one of the city’s finest to this day.

However, a night at the Adolphus Hotel might just come with more than a continental breakfast. According to some, the hotel is not only the finest in the city but also the most haunted. The hotel is reportedly plagued by the blighted ghost of a bride left at the altar, along with a few unlucky souls who met their untimely death in the hotel’s cavernous elevator shaft. Think you’re brave enough for a stay at the haunted Adolphus Hotel? Read on, brave traveler.

Although the contemporary high-rises of Downtown Dallas tower above it today, at the time of its construction, the Adolphus Hotel stood as the tallest building in all of Texas. The hotel was built by Anheuser-Busch Company founder Adolphus Busch and named in his honor. Busch commissioned renowned architect Thomas P. Barnett of Haynes & Barnett, who designed the Adolphus in an intricate, opulent Beaux-Arts style. When the hotel was complete, it stood 22 floors tall and towered over the burgeoning Dallas skyline.

The Adolphus first opened its grand, ornate doors to the public on October 5th, 1912 to rave reviews. Guests were dazzled by its grand design, luxurious rooms, and impressive size. The hotel quickly grew to national prominence, and travelers from all over the world dropped in for a night at the Adolphus. Busch’s dreams of opening Dallas’s grandest hotel had become a reality.

Unlike other hotels with long histories, the Adolphus never declined or fell into disrepair. In fact, the hotel has enjoyed popularity and acclaim since its beginnings. In the 1930s, industry pioneer Ralph Hitz’s National Hotel Management Company took control of the reins. Rather than sink into the same depression that gripped the nation, the hotel flourished. Under Hitz’s direction, the hotel served as a stage for some of the era’s premier big band musicians. Audiences from all over Texas flocked to the Adolphus Hotel to see legends perform such as Tommy and Jimmy Dorsey, Glenn Miller, and Benny Goodman.

Equally significant among its achievements, Victor H. Green featured the Adolphus in the 1936 edition of Negro Motorist Green Book, a travel guide detailing which hotels were safe and welcoming for Black Americans. According to the Green Book, the Adolphus welcomed all.

In addition to welcoming guests of all colors and backgrounds, the Adolphus has also hosted an impressive array of famous guests. Throughout its history, the hotel has boasted the patronage of several United States presidents, including Warren G. Harding and George H. W. Bush. Leaders from across the pond have enjoyed stays as well, including Queen Elizabeth II and Prince Philip. In continuing the tradition of hosting great talent, the hotel also boosted the developing careers of legendary comedians Bob Hope and Jack Benny.

In the 1980s, the hotel received a major makeover. Times were changing, management observed, and the Adolphus needed to change with them. $80 million dollars later, the hotel was grander than ever before. Rather than create more rooms, renovation efforts opted to enlarge and modernize the existing suites. So although the total number of rooms had narrowed to 428, the rooms were more spacious, more luxurious, and of course, more expensive. Shortly after renovation efforts were complete in 1983, the hotel was added to the prestigious National Register of Historic Places.

For decades, the Adolphus Hotel has added style to the city’s skyline and provided travelers with a world-class experience. The hotel’s beauty and class have also become a point of pride to the city, landing it a coveted designation as a Dallas Landmark in 1987. The hotel has been named one of the top ten in the nation by Conde Nast Traveler and continues to receive high ratings from Zagat, Fodor’s, and Frommer’s. Today, the Adolphus enjoys a spot in the Marriott Hotel’s Autograph collection.

For all its glitz and glamour, the Adolphus Hotel is no stranger to guts and gore. According to legend, the hotel has hosted not only famous comedians and big band performances but a whole chorus of the undead. Reports accumulated over the years pinpoint a majority of sightings to one location: the elevator. Or, more precisely, the elevator shaft. According to reports, countless victims have fallen down the shaft and into the basement below or been crushed to death by the passing elevator car.

The first death of this nature occurred a mere two weeks after the Adolphus opened its doors in 1912. A waiter, who had just arrived from Chicago the day before, turned to say something to his companion as he stepped onto the elevator. He failed to notice that his ride had left without him. Rather than going up, he fell three floors down the elevator shaft, crushing his skull on impact. He died two hours later at the Baptist Sanitarium.

A similar incident occurred in 1917 when a newly minted elevator boy attempted to leap inside the elevator car as it made its ascent. Unfortunately for him, his timing was off and the boy plummeted 100 feet to the basement instead. The papers reported rather gruesomely that his skull had been shattered and both of his legs had been broken.

If you assumed guests and employees of the Adolphus would have learned from the missteps of their predecessors, you’d be sorely mistaken. In 1924, just days before Halloween, a young cook became the elevator’s third, far from final victim. According to reports, the cook stuck his head out into the elevator shaft to see what was taking so long. His answer came just seconds later when the descending car came barreling straight for him, killing him instantly.

For 50 years after this unfortunate incident, the elevator seemed satisfied with the lives it had taken. But in the 1970s, its blood-lust reawakened once again. Early in the morning on March 15th, 1971, a hotel employee asked his companion to ensure that the elevator car had arrived at the second floor so they could load band equipment onto it. “Yes, it’s here!” the second employee replied to the first, just before stepping into the empty elevator shaft and meeting his death in the basement below.

As gruesome as these reports may seem, they pale in comparison to the ghost stories they’ve inspired. Guests riding in the elevator alone have reported hearing the unearthly, tortured moans of the undead coming from the walls, while others have heard the last words  spoken by the elevator’s final victim as they step inside: “Yes, it’s here!”

Even more terrifying, guests riding the elevator late at night have reported spotting the mangled forms of hotel employees riding beside them, usually dressed in old-fashioned uniforms. Just as the doors open, the figure warns the guest to watch their step before disappearing.

Undoubtedly the most infamous spirit to haunt the hall of the Adolphus is the ghost of a young bride-to-be, who arrived in Dallas for her wedding in 1935. The guests gathered inside the hotel’s ornate ballroom on the 19th floor and waited for the bride to make her way down the aisle. Yet the groom was nowhere to be found. The wedding party waited for hours, but the groom never arrived. Heartbroken and utterly humiliated, the bride fled the scene. Hours later, her body was found hanging just a few feet above the altar where she was set to take her vows.

Ever since that fateful night, guests staying on the 19th-floor report hearing a woman crying, footsteps running up and down the hall, and even the sound of a rope creaking under the strain of a body. Staff and guests of the hotel report an eerie feeling of being watched, or of a presence in the room with them. The bride’s spirit has been spotted wandering the halls after events and parties, still wearing her white dress and veil. Maybe the jilted bride-to-be searches for her long-lost groom, or perhaps a new one, among the guests.

Related: A timeline of the Adolphus Hotel’s potential ghosts

If you find yourself lucky enough to visit the marvelous city of Dallas, consider dropping in for a stay at the fabulous Adolphus Hotel. You’re sure to experience the best the city has to offer; just remember to watch your step.