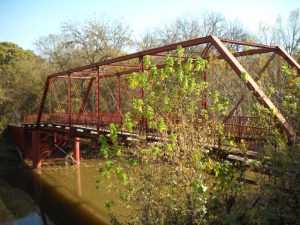 Passing over any bridge as antiquated and creaky as the Old Alton, it’s normal to feel a little unsettled. But for this particular bridge, those feelings may be more grounded than not. According to local lore, the historic Old Alton Bridge marks the entryway to the territory of a malevolent demonic force known only as “the Goatman.” Some even believe that crossing over the bridge at certain times of night can unlock a portal into Hell itself. If you think you’re brave enough to cross the haunted Goatman’s Bridge, read on. But be warned, the creature is said to appear whenever someone mentions its name…

The Old Alton Bridge is a historic iron bridge that spans over the muddy waters of Hickory Creek and connects the city of Denton to the city of Copper Canyon, a little less than an hour’s drive from Dallas. The bridge’s architectural composition is known as a truss, a visually distinct structure of connected elements forming triangular units. These units are usually stressed from tension, compression, or both in order to support heavy loads. Heavy loads were exactly what the bridge was intended to support when the King Iron Bridge Manufacturing Company commissioned it in 1884. In a time predating cars, massive cargo carriages drawn by hefty workhorses became the bridge’s most frequent users. Gradually, these carriages were replaced by automobiles, which were supported equally as well by the bridge’s sturdy truss structure.

The Old Alton derives its name from the now-abandoned town of Alton, which from 1850 to 1856 served as the seat of Denton County. Though the community is no more, the name remains. Although as far back as the 1930s, the bridge has taken on a second, much more sinister nickname: Goatman’s Bridge.

For decades, the Goatman’s remained as consistently in use as it had in the 1880s. However, this changed in 2001 when vehicle traffic was redirected to an adjacent, more contemporary concrete-and-steel bridge. This change was enacted to correct a glaring problem that had arisen when the bridge transitioned from carrying horses to carrying cars. Before the new bridge, drivers had to signal with their horns before crossing the single-lane bridge, as there was room for only one vehicle to pass at a time. The newly improved bridge solved this problem as well as straightened out a sharp curve on both sides of the creek.

With cars and all their noise safely out of the way, the Old Alton Bridge was free for hikers and nature lovers to pass safely. The bridge also became an important junction connecting the Elm Fork hiking trail to the Pilot Knoll hiking and equestrian trails, reverting the bridge back to its original use of transporting horses and their riders. Along with hikers, bikers, and horseback riders, the Old Alton Bridge and surrounding wooded areas have become a popular destination for bird watchers and nature photographers.

In July of 1988 at just over 100, the Old Alton Bridge landed a coveted spot on the National Register of Historic Places, as well as recognition as a Texas Historic Landmark. Signs found around the area clearly denote the special place the bridge and surrounding woods have in the community’s hearts, including one which reads “I have many memories of the Old Alton Bridge and I love every one of them,” a quote attributed to Wayne Stuart Ryan.

Despite the warmth the community displays toward the bridge, another feeling altogether permeates the hot summer air when wandering down the Old Goatman’s Bridge at dusk; a feeling of deep, almost primordial terror of what lurks beneath.

While some bridges are inhabited by pesky creatures such trolls, the Old Alton Bridge harbors a monster of a much darker nature. The ominously named Goatman has been described by witnesses as a truly frightening sight plucked straight from a nightmare or the yellowed pages of a book of folktales. According to their reports, the Goatman stands eight feet tall, with the chest and arms of a man, the hindquarters and hooved feet of a goat, and a frightening goat’s head complete with huge curled horns and glowing eyes. Some reports describe the Goatman’s fur as a deep, fiery red, while others describe his coloring as black as night, so black you can hardly see him as he moves through the edges of the trees.

Whenever a sighting of this ghastly figure occurs, a string of mysterious disappearances is sure to follow. Some believe the Goatman remains dormant for years at a time and awakes only to hunt for prey. Other legends circulating about the demon focus on his name.

According to legend, those who dare speak the Goatman’s name while crossing his bridge unwittingly summon his spirit. While the Goatman is said to sleep beneath the Old Alton during the day, he habitually creeps out from under it to hunt for food at night, returning only at the sound of his name. If his name is uttered during the day, he is awakened and is often even more vicious due to the disruption of his sleep cycle, or so the story goes.

Legend further holds that the Goatman’s Bridge provides a gateway into Hell. Visitors crossing the bridge at exactly three a.m. have reported horrific visions of fire and brimstone; those fortunate enough to return, that is.

A second spirit is often said to keep the Goatman company, that of a young mother crying out eternally for her lost child. Residents making their way over the bridge late at night have reportedly heard her ghostly wails, and others have spotted her crying at the bridge’s center. When approached, the woman is said to vanish. Some say the two ghosts are connected, and that years ago, the Goatman stole the young woman’s baby. When she found out, she threw herself from the bridge, and her spirit has haunted it ever since.

Aside from demonic satyrs, a second version of the story seeks to explain the origins of Goatman’s Bridge. According to this story, a black goat farmer by the name of Oscar Washburn and his family moved into a home located just north of the Old Alton Bridge. Within a few years, Oscar had built a reputation for himself as a reliable and trustworthy businessman and a valuable member of the community. Many of his neighbors bestowed upon him the affectionate nickname “the Goatman.”

However, not everyone was pleased with Oscar’s newfound success and acceptance within the North Texas community. A vicious and hateful group of Klansmen working in the local government began to conspire against him, waiting for Oscar to slip and give them some excuse to be rid of him. Their chance finally came that summer. Unaware of the plot against him, Oscar had rather harmlessly installed a sign on the Old Alton Bridge reading “This way to the Goatman’s.” In response, the members of the Klan employed at the local police station drafted a law making it illegal to solicit anything at the bridge, and dually arrested Oscar in August of 1938.

The Klansmen, however, did not exactly follow the due process of the law. Instead of reading Oscar his Miranda Rights, the men assembled a vicious mob to cross the bridge and kidnap Oscar from his home. The men dragged him to the bridge where they had prepared a noose. After securing it around Oscar’s neck, they tossed him over the side.

But when they checked the noose to ensure that Oscar had died, they were in for quite the shock: the noose was empty. In a panic, the mob fled from the bridge. To this day no one knows exactly how Oscar was able to evade the mob’s wrath, but legend holds that the name Goatman’s Bridge came about to honor him.

Related: Goatman’s Bridge is a reminder of the cowardly Klansmen’s dastardly deed

Other strange happenings recorded at the bridge include strange lights appearing in the surrounding woods, along with reports of visitors feeling hands grab at them in the dark, o a rain of rocks pelting them as they cross the bridge. Due to the great number of unexplained happenings at the Old Alton, the bridge has been the subject of a number of investigative paranormal shows, Ghost Adventures, and Buzzfeed Unsolved: Supernatural among them.

So whether the Old Alton is named after a terrifying demon or a particularly resilient goat farmer, the bridge is certainly worth the trip. Nature lovers and paranormal enthusiasts alike will love checking out this remarkable historic landmark and the beautiful scenery surrounding it, just be sure not to cross after three a.m.

Next: The Haunted Millermore Mansion